This Phonon Improvement Proposal 01 (PhIP-01) represents a request for comment and community signaling regarding a strategy for bootstrapping initial PHONON liquidity on DEXs via an incentive program and/or utilizing a service such as OnDo to borrow assets that would be leveraged to create a PHONON/asset pair.

Bootstrapping PHONON liquidity on DEXs is an essential requirement for the DAO’s long-term success and will have a number of benefits, including:

Recently, DAO members created an informal PHONON DAO Liquidity Working Group with the aim of providing a recommendation to the community about which initial liquidity incentives/programs to initiate.

The Liquidity Working Group has met with several protocols and discussed a range of options for bootstrapping initial liquidity and has come up with three options for community consideration, which are outlined below.

Below is an overview of potential liquidity bootstrapping options. The goal of the program is to deepen PHONON liquidity so that individuals can:

Consensus Gathering Poll
Please indicate which liqudity bootstrapping option you prefer; Explain your vote in the comments below. Note: Any community member can vote in this poll, not just PHONON holders

Right now I think choosing one option would be the better move.

To me Ondo makes more sense putting the IL in the hands of the DAO while receiving fees and TRIBE rewards. Then moving from this option towards a longer term solution like KPIs or Olympus + CEX listing.

I went with LaaS only (option #1) at this time. The reasoning is I’d like to see how LaaS is going before committing that much of the treasury to a geyser option which could result in downward pressure as LPs receive their staking rewards.

The key for all of this is to prevent downward pressure on the token, in order to build the treasury for the long term and protect the token. Having slept on it, I am favor of Ondo Liquidity as a Service and against the use of the Geyser either as a single option or the hybrid option.

Here’s my train of thought.

The first question is, do we want to liquidity mine (Geyser), or do we want Liquidity as a Service (Ondo):

Both the Geyser and Ondo (LaaS) solutions to our desire for liquidity bootstrapping are designed/intended to reduce liquidity mercenaries.

A lot has been written about this, but you can read Cronje’s, and Santoro’s blogs to understand more, but TLDR, liquidity miners dump 80-90% of their tokens for the most part, and leave the protocol high and dry. Early projects with great tech suffered a lot as a result (ALCX maybe most notably).

Geyser’s solution is simple to set up, and is a battle proven smart contract, it also could be a mechanism for us as a DAO to bootstrap collectively. The downside is that it is still liquidity mining. Instead of paying out rewards to miners linearly, Rewards are paid out via multiplier points to people who stake longer over a 120 day period.

While this may incentivize some to stake for longer, in the end, I still think any mercenary miners will still be dumping the token. No matter how great your project is, and how great the devs are, it’s hard to keep people from dumping the token if the only stickiness for them keeping their liquidity in the protocol is the bribes you have to pay out.

TLDR, I think Geyser will cause downward pressure on Phonon.

As for Ondo, there are some risks, IL being chief among them, which may increase our interest costs to pay back the loan.

But perhaps most importantly, we get to use our own liquidity to bootstrap our pools, so that we don’t have to be beholden to any miners.

Really appreciate the post @davoice32. I want to make sure everyone fully understands the structure of the Ondo vaults so, I’m going to leave this FAQ here Please make sure to read this in its entirety to understand the risks and benefits to the DAO.

I will also attach this financial model that can be used to estimate various outcomes (gains and losses) at the program’s maturity.

These resources reference FEI and the TRIBE reward token, but we can also use FRAX and the FXS reward token. There is also the option for Ondo to provide ETH, although this comes with a slightly higher APR and isn’t incentivized.

For clear and actionable decision making, I believe option one allows for member objectivity because the DAO runs the risk/ holds the debt.
The downside to this, possibly, is lack of motivation to participate in conversation and voting.
A proposal to reward contributers may be useful.
Option two and option three attract self-interest borne decisions, because the community are propping up liquidity, exemplified by the IP and reward dumping issues discussed above.
The desire to not lose personal money generally does not encourage high quality contribution to large scale/long timeframe project decisions.

Agree with this assessment. This is not a long term solution to the liquidity problem. However, It is likely going to help ease the minds of GRID holders swapping to PHONON and allow for entry points of investors and developers who want a stake in the project.

to launch a pool on Uniswap v2 or Sushi 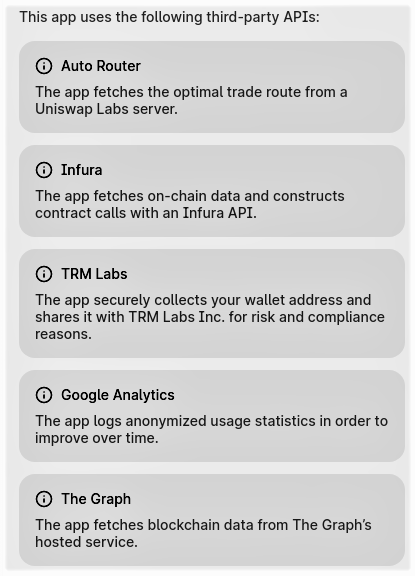 Does anyone know who’s in control of their domains?

What is TRM labs? Is this from Uni or sushi?

TRM labs is a blockchain analytics company that works with various protocols, such as Uniswap. Uniswap is sharing data with them on addresses that interact with the protocol via their application. TRM shares this data on ETH and cross-chain transactions with TRM which has contracts with various agencies, financial services companies and governments, to track specific addresses and conduct automated risk analysis/assessment on them.

This data sharing agreement was put in place in October, and only applies to UIs that are run by Uniswap Labs.

I’m not aware of Sushi has a similar data-sharing agreement in place with TRM.

I should say that the same data can be accessed by TRM without this agreement (by examining the Uniswap router on-chain. So I wonder if Uniswap is sharing additional data on users (IP addresses, etc.) in addition to these addresses (this information is tracked by Google Analytics).

I don’t believe that Sushi Swap is collecting/sharing this type of data, which is why I’d recommend Sushi for a deployment rather than Uniswap. (It’s not generally known by the community that Uniswap is capturing and sharing this data.)|

Another alternative is for the DAO to launch our own Uniswap front-end to facilitate trading via Uniswap (a few projects have done this for convenience) and educate users about the privacy concerns associated with utilizing Uniswap’s official front end (makes sense for a privacy-focused project).

DeFi history teaches us to be in favor of DAO-governed dApp frontends, and code managed by properly decentralized orgs with rigorous security practices.

Most recently, we’ve seen 2 frontends that suffered supply chain exploits - Sushi’s MISO, and Badger’s vaults, where malicious actors, one of which was confirmed as a former team member, implanted malicious code.

Who reviews and approves PRs, content hashes…, and then who owns the domains and points them to the ipfs hash?

Currently I am leaning more towards Ondo. However, I do think that we could create a model to better understand the risk/reward of each (although it may not be worth the time effort to do so).

One thing to think about with Ondo is to do multiple pools (e.g. PHONON / FEI & PHONON/ETH).

This is back of napkin (so please correct me if my logic is off) but I believe this has a couple of benefits. Namely, it reduces some potential downside by increasing fees that the pools earn (arbitrage earns your fees on 2 pools).

Here are the potential outcomes I am thinking about:

I’ve seen some discussion on which DEX to use. Here are my thoughts:
*Uniswap v2 - Great because everyone knows it. However, no rewards.
*Sushi - If we can get sushi rewards for LP then this would incentivize others to add LP and it would further mitigate our risk.
*Balancer - We can choose pools with adjustable fees. So instead of 0.3% we could go as high as 10%. This really mitigates risk buy can also reduce volume. If we can get BAL tokens for LP rewards then it would be similar to sushi.

This assessment seems accurate. We could do a $2m loan of FEI and a $2m loan of ETH to create these pools. At current price ($0.0123) we would need to use 325m PHONON from the treasury. I can begin working on the formal proposal with this proposition included because i think people will like that.

Side note: Ondo does not support balancer. Anyone with SUSHI connections should reach out and see if we can work something out with their rewards program.

While I am partial more direct Geyser approach, I see the wisdom in a LaaS option. The support from the DAO Treasury is a good utilization of resources and the OnDo documents have been thorough.

Re: venue - If we make a good case for rewards from Sushiswap, we can apply to their grant program without needing to know someone there.

Similarly, we can appeal to see when OnDo could support Balancer.

While we may not need all 3 options, the more we can get to support, the more appeal/distribution we get based on reasons @alpacafan mentions. Security risks aside.

Love this idea! FEI and ETH could pair well with PHONON. Attached is a Reddit thread that I just commented on about the arbitrage opportunities between WLUNA and LUNA. Similar concept…

Forgive my ignorance here, but have we considered a PHONON lockup with a guaranteed yield? In other words a GRID conversion enticement Similar to the Pi network. I just locked up for the 3 year max. Totally different use case and platform, but worth considering. Perhaps we can incorporate a similar downline booster structure as well? Attached is a pic for reference. I know this may not be directly related to bootstrapping per se, but thought it may be of value to mention.

All for Option 1 as it gives the DAO a short term flexible liquidity solution with the pros outnumbering the cons IMO.